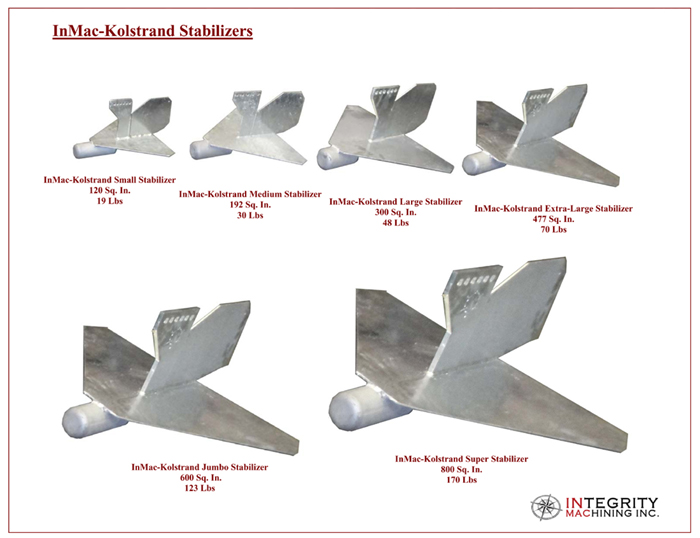 The following information is taken from the United States Patent #2,561,539 in order to help explain the Kolstrand Stabilizer, the object of its use, and how it is used.

This invention relates to submersible marine stabilizers to be suspended from two outwardly and upwardly extended main poles on opposite sides of the vessel, so that the stabilizers will be submerged in the water alongside the boat. The stabilizers should be under the surface of the water 10 to 15 feet deep so they will not pull out of the water in rough weather or sea conditions.

In a similar manner, the plate is very quickly angularly moved from a substantially horizontal position by the upward pull exerted on the cable. When said plate (wing) is moved from a vertical to a horizontal position by the upward lift of the cable, the leverage afforded by the stabilizer mast and upward pressure of the relatively wide rear end portion of the plate against the water helps to orient the plate quickly.  Thus the retarding pull of the stabilizer will be exerted on the cable the instant upward movement of said cable begins. As the boat rolls toward a stabilizer and then reverses its direction of roll, the stabilizer first dives rapidly and then quickly resumes a horizontal position.  This insures that there will not be any slack to take out of the cable when the boat reverses its direction of roll, and consequently there will not be any jerk or abrupt retarding force applied to the cable or poles or other rigging.

These stabilizers will operate efficiently to minimize the roll of a boat that is Anchored, or is moving at Trolling Speed, or at Cruising Speed.  This makes it possible to operate a boat in rougher water than it can be operated in without the stabilizer, and in doing so often makes it possible to operate a boat more hours per day.  Also the use of these stabilizers makes it safer and easier to work on the deck of the boat in rough weather.

All prices are in USD.